The problem with NPS

There is a rumour going round that the reason NPS is so successful is that you can explain the formula on the golf course. This is indeed possible. Unfortunately, it is difficult to describe what NPS actually brings us.

In brief the NPS calculation expects a customer to evaluate their probability to recommend on a 10-point-scale. Then you calculate the proportion of nines and tens and subtract from this the share of values from one to six. The difference yields the NPS, or Net Promoter Score.

But what about sevens and eights? These numbers are ignored, for some reason. The chart below displays three different configurations, which all produce an NPS or 0.5.  Would you say that these three cases are the same? Neither would I. 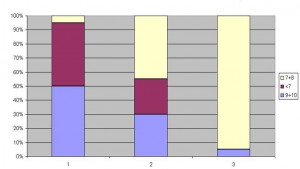 The result is a lack of clarity and you need an expert to interpret it. As an orientation tool for employees who have contact with customers, this may have some use. As a benchmark between companies, its use is something like an oracle.

In the end, it’s probably best if NPS remains as a nice story for the golf course.